Green Tea has caught the attention of doctors in the United States. In October 2003, it was announced that the National Institute of Cancer had awarded 0,000 grant to the Medical College of Georgia, so scientists continue their research into green tea’s cancer-fighting properties.

Today, tea is the second most consumed beverage worldwide. Only water is consumed more often that tea. It is estimated that over half of the world’s population uses herbal tea for medicinal purposes. While nothing can keep you young forever, the life-extending properties of Green Tea may effectively delay at least some of the effects of aging. [1] 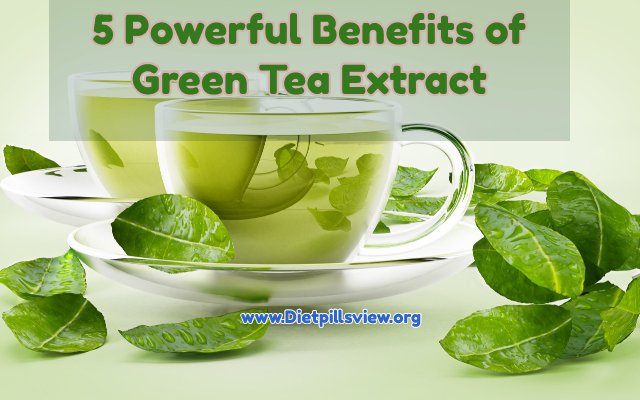 What is Green Tea Extract?

Green Tea Extract comes from the leaves of the Camellia sinensis plant. For centuries, various herbal teas have been used by practitioners of traditional medicine for their reputed medicinal qualities. In fact, archeological records date the use of the plant as a beverage since at least the tenth century B.C. in China.

Green Tea comes from the same plant as Oolong and black tea. Of the three varieties of Camellia sinensis tea, Green Tea contains the highest levels of polyphenols, the antioxidant substance that is believed to provide the anti-cancer properties of green tea. The four primary polyphenols or catechins found in green tea are epicatechin, epicatechin gallate, epigallocatechin, and epigallocatechin gallate (EGCg). A review of studies investigating Green Tea and cancer prevention research data indicate that there is more conclusive evidence for the chemo-preventive effect of Green Tea compared with black tea. [2] These same polyphenols are also believed to be helpful in treating atherosclerosis.

Herbalists have long known about the benefits of green tea. As scientists research Green Tea and Green Tea extract, it is becoming clear that many of these claims have a scientific basis.

It has been theorized that the active ingredients in green tea, the polyphenols, act as antioxidants and may inhibit the growth of existing cancer cells. In some laboratory studies, injections of tea extracts reduced the size of cancerous tumors in animals.

The antioxidants in Green Tea may also be helpful in lowering cholesterol and preventing hardening of the arteries and ischemic heart disease. Another study found that Green Tea extract may boost energy levels and promote fat oxidation, and consequently, may be a useful tool in weight control.

Green Tea is a known antibacterial agent. In the mouth, Green Tea may help to prevent gingivitis and periodontal disease by killing E. coli and streptococcus bacteria. This antibacterial action can also be effective in treating bad breath (halitosis) by killing odor-causing bacteria.

Several uses have been proposed for green tea, many of which are supported by medical research. The following examples taken from case studies are intended for information only and are not intended to provide medical advice.

Taking Green tea supplement for one month with a calorie restrictive diet may yield result like this.

Green Tea has long been associated with health benefits. Recent research indicates that it may hold promise as a treatment for obesity and other weight problems. It is believed that more than half of Americans are either overweight or obese. These conditions are strongly associated with complications like type 2 diabetes mellitus, hypertension, heart disease, gall bladder disease, and sleepapnea.

Losing weight can help alleviate some of these symptoms. Researchers have found that Green Tea increases the amount of energy spent by the body, and thus possibly contributes to a weight loss benefit. [3] Other research seems to confirm green tea’s potential as a weight loss aid.

Green tea shows promise in cancer prevention research. [6], [7] Green Tea appears to have antitumor properties. [8] Clinical studies have indicated that consumption of Green Tea may reduce the risk of certain types of cancer, including oral cancer [9], prostate cancer [10], and colon, stomach, and rectal cancers. In studies on animals, Green Tea has consistently demonstrated the ability to inhibit the growth of cancer cells in skin, lung, colon, liver and pancreatic cancer. [11] Other research investigated the use of Green Tea as a treatment for cancer in the mammary glands and the colon. [12]

According to several of the research studies, green tea compound Catechin reduces the levels of LDL (low density lipoprotein) or ‘bad’ blood cholesterol, thereby reducing the risk of coronary heart disease. Antioxidants in green tea also have been shown to protect LDL cholesterol from oxidation. Oxidation of LDL plays crucial roles in atherogenesis or the formation of atheroma which is commonly known as lipid deposits, which are associated with heart disease. Abstracts of Studies using Green Tea and or Polyphenols and Cholesterol

According to Dr. Tariq M. Haqqi, an expert on Greet Tea and associate professor of medicine at Case Western Reserve University, “many polyphenols in green tea possess much more potent antioxidant activity than well-known antioxidants such as vitamin C and vitamin E.”

The main antioxidant found in green tea called epigallocatechin gallate, or EGCG is at least 100 times more effective than vitamin C and 25 times better than vitamin E at protecting cells and their genetic material, DNA, from damage believed to be linked to cancer, heart disease and other potentially life-threatening illnesses, according to research conducted at Kansas University. This was believed to be the first research that quantify the effectiveness of green tea’s disease-fighting capabilities and compared it with other popular antioxidants.

Surprisingly Green tea is good for couple due to its rich catechins compound. Catechins also boost desire by promoting blood flow to your genetal regions. “Catechins kill off free radicals that damage and inflame blood vessels, increasing their ability to transport blood.

According to BBC News, researchers at Southwestern University in Georgetown, Texas, have discovered that caffeine consumption may lead to an increase in sexual desire in women. Lead researcher, Fay Guarraci, M.D., suggests that the caffeine in green tea and coffee may have a stimulating effect on the section of the brain that is in control of sexual arousal.

All effective weight loss programs require the same two essential elements. To lose weight, the body must consume less fuel and burn more energy. Green Tea helps accomplish both goals. “Filling up” with tea reduces the chance of eating or drinking something else that might have a higher caloric value or fat count.

Green Tea also helps the body burn energy. One study found that Green Tea drinkers burn as much as 4% more energy than people who did not consume green tea. Green Tea appears to transform the body into an energy burning machine.

Researchers have found that Green Tea extract burns more fat than what would be expected of caffeine alone, indicating a strong synergistic effect between green tea’s catechin-polyphenol and caffeine content. The polyphenols found in Green Tea are important because of their antioxidant activity, an essential element when the metabolic rate in the oxidation of fat is increased.

Obesity researchers wrote in the International Journal of Obesity that “such a synergistic interaction between catechin-polyphenols and caffeine to augment and prolong sympathetic stimulation of thermogenesis could be of value in assisting the management of obesity.” [28]

The benefits of anti-oxidants in cancer prevention are well documented. In addition to its antioxidant properties, Green Tea polyphenol appears to target the mitochondria in tumor cells, [29] killing the cell before it can grow.

As a health care product, Green Tea has shown more promising results than black tea in the treatment of obesity and as a cancer-preventing antioxidant.

Known side effects of Green Tea include excess gas, upset stomach, nausea, heartburn, stomach ache, abdominal pain, dizziness, headache, and muscle pain. However, researchers in clinical trials consider these minor side effects. Doctors in one study on cancer patients taking Green Tea wrote, “We conclude that it is safe for healthy individuals to take Green Tea polyphenol products in amounts equivalent to the EGCG content in 8-16 cups of Green Tea once a day or in divided doses twice a day for 4 weeks.” [30]

In summary, green tea is generally well-tolerated in humans. It is considered safe and effective, with relatively few side effects. However, patients should be cautious of drug interactions with certain medications.

Certain medications may interact with green tea. Talk with your doctor if you are using any of the following medications:

The genuine GT extract supplements aren’t expensive. It was made expensive by greedy marketers by spending millions on advertising & PR stunts. You can buy very good quality supplement by clicking on the image below.

There are 100’s online scams related to weight loss supplements. This is popularly known as ‘free trial scam’. Under free trial terms you have to pay small shipping charge. Online Fraudsters deceive customers by cleverly written terms & condition. They enroll you into auto-monthly re-billing with exorbitant cost. Sometimes they even charge more $100 per month for useless pills and weight loss advice. Canceling forced recurring charges are almost impossible.

Don’t give your credit card information for a free product. If it is really free why they ask for financial information?